English cottage home plans are a very popular style of architecture in the United States and many other areas around the world. This style of home is often referred to as a cousin to the English Tudor style of design, because both designs share some similar characteristics. 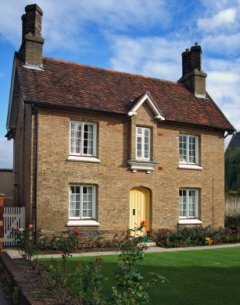 This type of style has been consistently popular since medieval times, and can be found in almost any city in the USA today. English cottages have a charm and elegance that is very appealing for many people and the interior is usually cozy and comfortable while the exterior is attractive and well decorated. Gardens are often a big feature of these homes.


English cottage home plans originated in England as the name of this style implies. These homes usually have one and a half stories and a simple layout, but modern versions can include two levels as well.


This style of home is romantic and picturesque. A cross gabled roof that has a steep pitch makes cottage style home plans an excellent choice even in colder regions. Most of these homes have a brick or stone exterior, which gives them an old fashioned appeal and makes them easier to maintain when compared to many other styles.


Originally cottage style home plans were typically smaller, which contributed some to the cozy feel, but modern architecture has allowed expanded plans which offer more room without changing any of the features that make these cottages so popular. These homes offer many Gothic architectural concepts and features.


Cottages in the English style are normally asymmetrical in appearance, and have various interior layouts that all share a common theme which is comfort. Many different decorative touches add a lot to the exterior appearance, and the inside of the home has nooks and crannies as well as other whimsical and charming features. 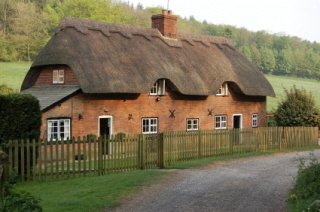 English cottage home plans frequently feature large chimneys which are highly decorated. Half timbering used as a decorative element is commonly included in the second floor and the gables of English cottages. These homes feature slender windows which are tall and offer multiple panes and glazing.


The material used to separate the panes of each wood was originally either wood or lead, but modern cottage plans eliminate any lead use in the windows because of the dangers this metal can pose in certain situations. Some of the English cottages have a false thatched roof, for a more authentic historical look, and this extra detail can really make you feel like you have stepped back centuries in time.


Cottage style home plans were originally first constructed in England during Medieval times, and this style has stayed popular and in demand through the centuries. The very first cottages of this style were built even before the Tudor reign, but the homes were thrown together and were not intended to last for centuries. 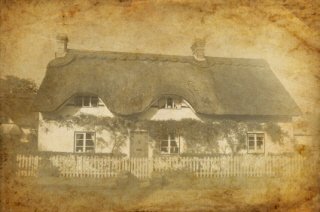 It was not until the late 1500s that this changed, and the monarch responsible for these changes was Queen Elizabeth I. Starting with this period in history the traditional English cottage was improved upon, so that it was designed as a permanent structure instead of just a temporary place to live.


The improvement in carpentry skills and craftsmanship in the 1500s were instrumental in the design of English cottage house plans that are so popular today. The original owners and tenants of English cottages were usually the laborer class during medieval times, and these homes greatly improved their living conditions and their comfort.


As time went on a cottage owner could add rooms and expand the space available in the home as their financial resources allowed, and the half timbered appearance and architectural style provided even the poorer classes with a small but attractive home they could be proud of owning.


Cottage style home plans in England during the Middle Ages were distinct to the region that they were built in. The materials used were those which were abundantly available in the local area, and this created many different looks and involved different types of construction materials used in these cottages.


This is one of the reasons why an English cottage never looks out of place, and blends so well with the surrounding land and vistas. Some of these original cottages were built using limestone, others involve granite or other stone types, and some relied heavily on oak wood because of the forested surroundings.


Some of the English cottage home plans were referred to as cob cottages, and these homes were constructed using only mud and straw, because there was a lack of other material types in the surrounding area. The roof of English cottages started out as thatch, but eventually tiles and later on shingles were used instead for better protection from the elements, lower fire risks, and because a stronger and more durable material was needed.


Once the Industrial revolution occurred this type of home became less common, because of the increased popularity of larger and more elaborate designs.


When settlers first came to the shores of America the English cottage style home plans were used in the new land because they were very easy to build, they could be constructed quickly, and there was an abundance of natural resources available. The simple design and construction of these homes made them a common design in America.


Some of these older homes may be covered with ivy and other climbing plants, and some builders made modifications to improve on the cottage design and add additional room for families. While the East Coast of the United States is where the first cottages were constructed, it is now possible to find this architectural style in every state and region of the country.


Who are the typical owners of English cottage home plans in the USA? The typical owner can vary greatly because these homes are ideal for most circumstances and family sizes. You may want to purchase this type of cottage if you are a single individual, because these styles tend to be smaller and easier to maintain. 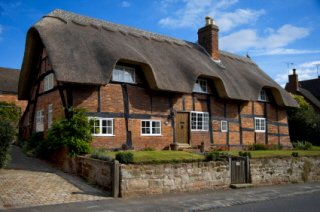 A couple may enjoy the romance and charm that is offered by an English cottage design, while still ensuring that adequate space and plenty of comfort are offered inside the home as well. Elderly individuals and couples may prefer a cottage because it is easier to maintain and has lower costs associated with upkeep.


English cottages can be found in a wide range of sizes, and various room numbers and arrangements. Some may only offer two bedrooms while others may feature four or five. This makes cottage style home plans ideal for families with children, and these homes can be a perfect fit whether you have a single child or an entire brood of them.


There are many different types of owners where charming English cottage homes in America are concerned, and this style is very popular with a diverse segment of the population.


Many people buy English cottage home plans to use as a vacation home, or because they want a second home that can be used to get away from everything and relax. Because many are smaller in size but are very attractive and include decorative touches, these homes can fit in almost anywhere.


Whether you want a secluded mountain cottage or want a primary home in a nice neighborhood that is elegant and may be less expensive than many other styles, an English cottage may be just what you are looking for.

Regional Differences in English Cottage Home Plans in the USA


English cottage home plans can be found in almost every city, county, and state in the United States, but there are some differences in this style according to the region where the home was constructed and is located. This style along the East Coast can include original structures built in the 17th and 18th century, when the settlers from England first arrived. Cottages on this coast tend to be smaller and more traditional, and usually include significant amounts of wood in the construction.


The East Coast was once rich in timber and other natural resources, and this style in the region reflects this fact. Shutters are often included because of the fierce winter storms that this coast experiences and smaller sizes are typical because they were easier to keep warm during cold weather. Wooden shingles and clapboard siding are frequently found on these homes in this region of the country.


In the northern United States cottage style home plans are also very evident, and can be found with very little effort. The steep roofs and gables help eliminate any snow and ice buildup, and any snow will just slide down the roof slope. Additional windows may be added in the north USA region with this style to allow additional light and warmth into the home during the months when the sun does not shine as brightly or as long.


The windows used in modern versions of an English cottage in the northern region may be wider than the original windows with this design. The large chimney is functional rather than decorative, and is used to help keep the home warm during cooler seasons.


English cottage house plans in the West Coast Region of the US involve some very distinct differences. Along the northern West Coast the woods used are not always oak, instead cedar and redwood timber are used at times because of the abundance of this wood. Cottages in this region may be small or large and extravagant, and the large chimney is included more for decoration than for function because of the mild climate.


Large windows which are placed strategically to provide the best views and cross breezes are often included in these homes. Brick and elaborate stonework are often combined with large amounts of glass, to take advantage of all the beauty and gorgeous scenery that the West Coast has to offer and to offer ocean views. 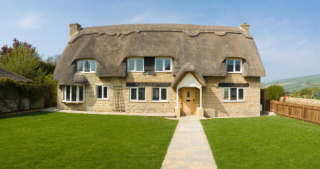 Most of the English cottage home plans in the southern region of the country may have a number of modifications, so that they are better suited to the warm and humid climate and increased insect activity. In the south many homes are made from brick and stone, and often wooden materials are eliminated whenever possible. High humidity encourages mold growth on wood, and can weaken the material over time in certain circumstances.


The roof slope may be modified with a decrease in steepness, because the region does not receive large amounts of snow and ice. Instead of wooden shingles and clapboard exteriors these homes usually feature brick, cement, stucco, or stone instead. These materials help keep the home interior cool and comfortable, without requiring as much energy use as other home styles and materials.